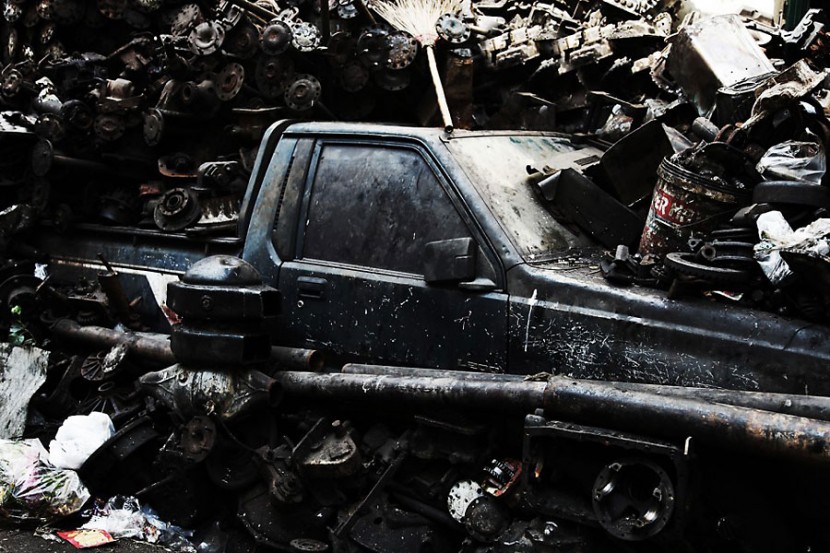 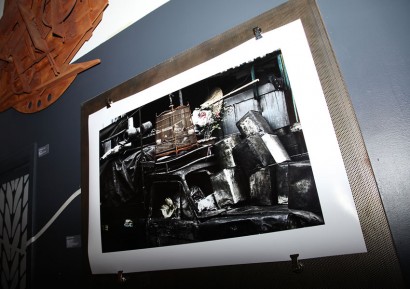 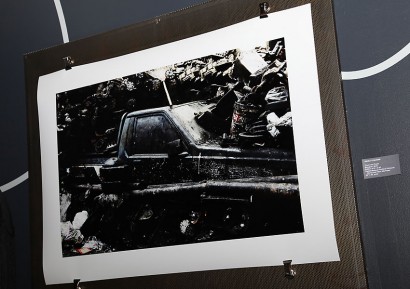 The two photographs and video art production by Indira Cesarine in the exhibit were produced in Bangkok, Thailand. Video art film “Bangkok High” shows a blur of the modern cosmopolitan city, where movement at night envelops the viewer in a cacophony of light and fleeting images. The visuals of traffic are transformed to create an orchestra of light that become a dance of order and chaos. The video evokes a hypnotic and surreal vision created out of the ordinary hum of traffic at night. Additionally the photographs by Cesarine, titled “Truck with Birdcage” and “Truck with Trash,” depicted vehicles that were left behind as junk to become part of the urban city walls. Piled with debris, they were left behind to become living sculptures. They are on one hand grotesque images of the debris of our society, images of pollution created by mass consumption, and on the other hand almost romantic in their distraught and particular state.

The press release noted, “Art and the automobile are two of the most luxurious, aspirational and divisive objects in humanity’s recent history. At the Motion Deconstructed show, we would like to invite you to take a contemporary look at what art can say about the automobile’s place in a modern society. Motion Deconstructed deals with the myriad of ways society fetishizes the beauty of the car, uses it as a status symbol and makes it one of the primary materialistic goals of people’s labours, but without bypassing its dark side as a clogger of streets and junkyards. Here you will not find traditional scenes in automotive art depicting race cars going around racetracks or shining as they park on a well manicured lawn. The themes of beauty and banality that are present in automobiles, juxtaposed with the auto-exotica in the Club, should make the viewer question what the connection of art and the mechanized society in motion means.”