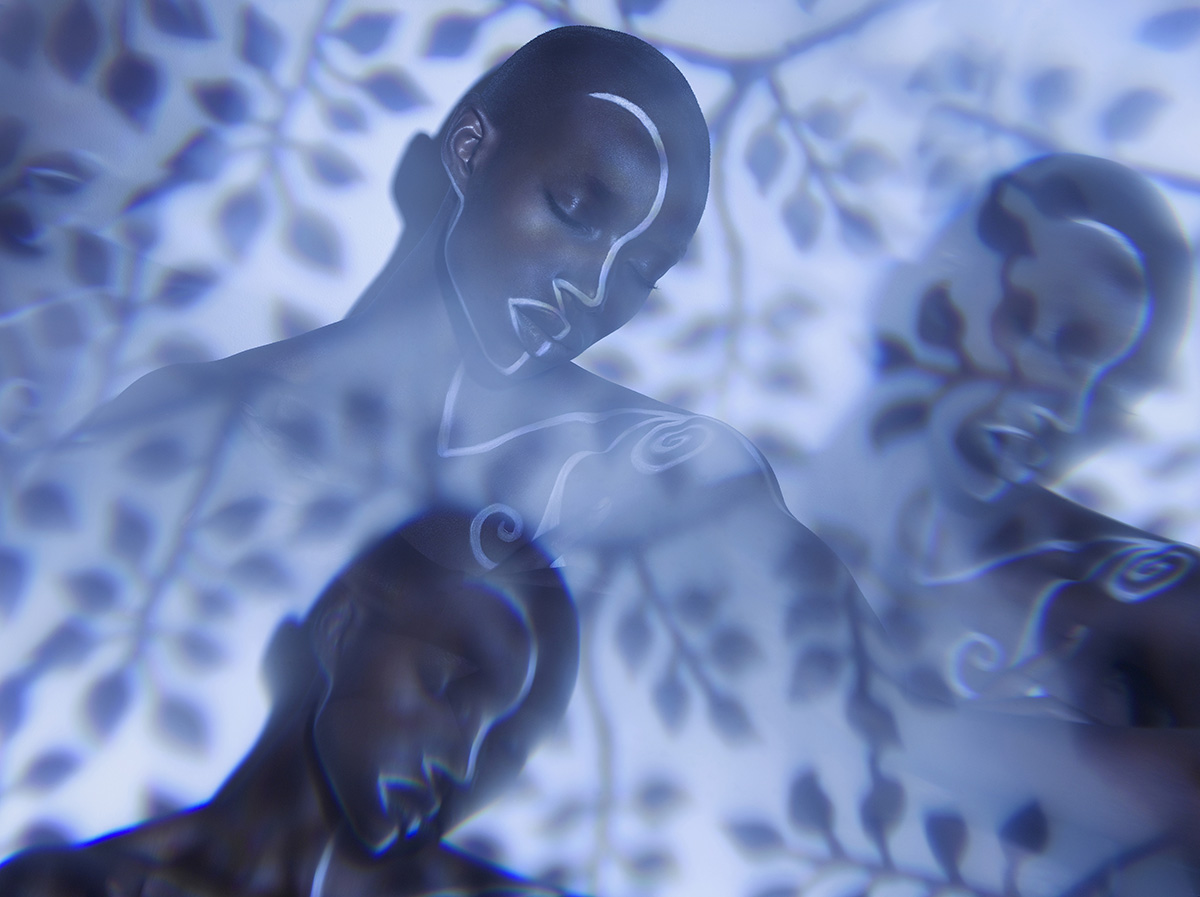 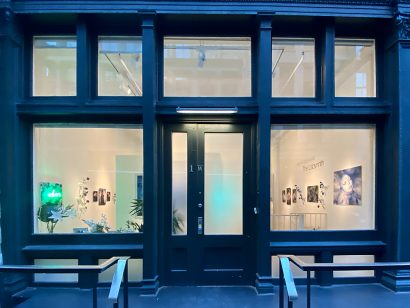 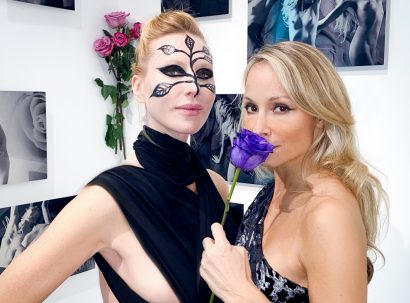 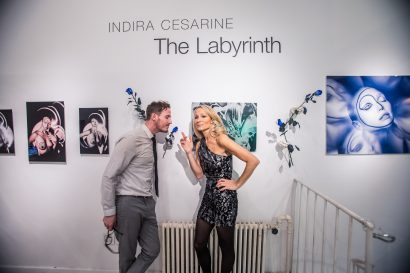 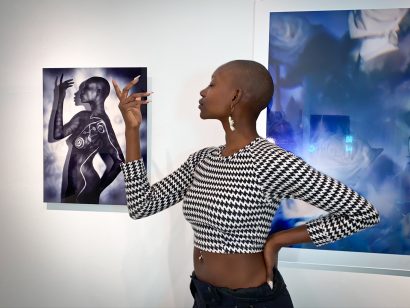 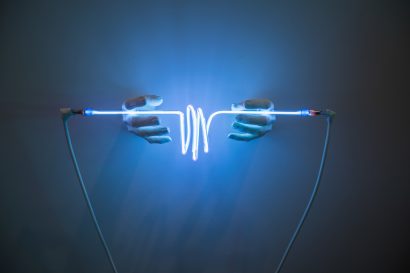 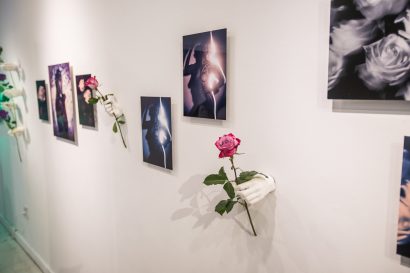 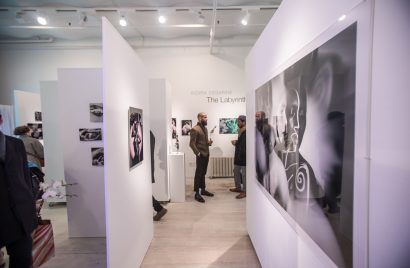 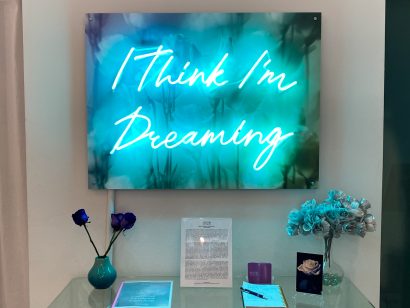 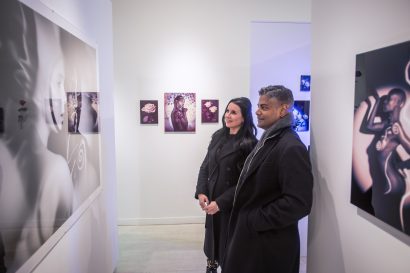 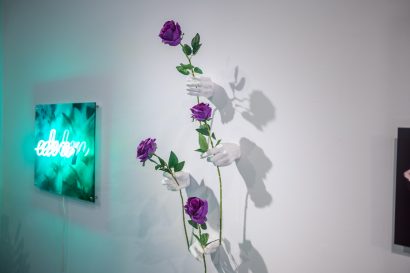 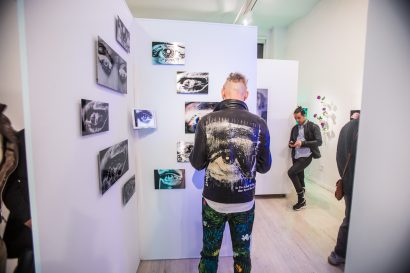 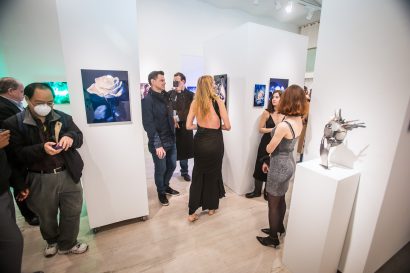 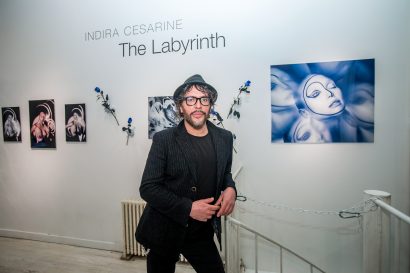 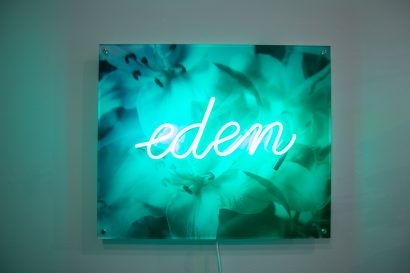 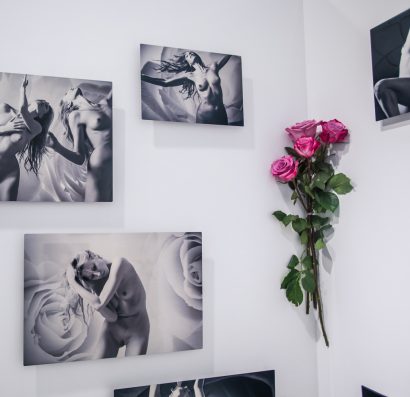 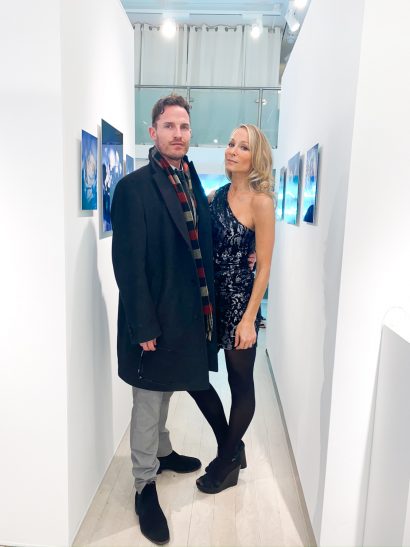 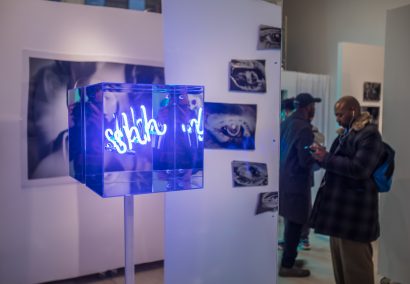 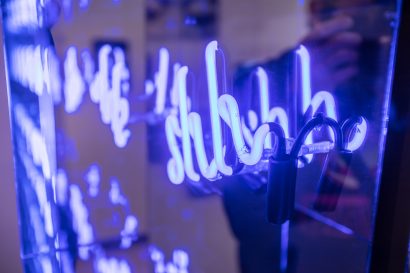 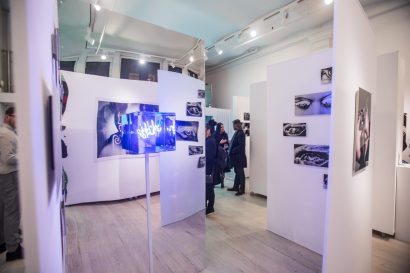 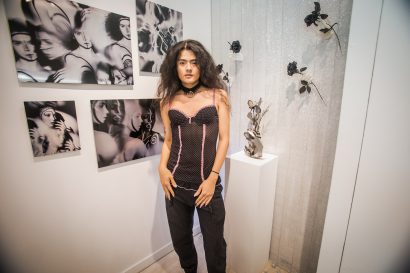 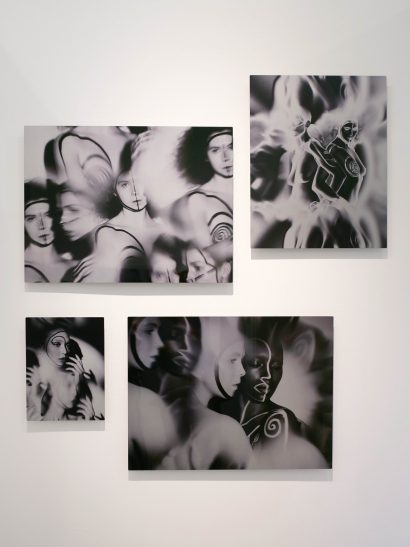 THE LABYRINTH
An Installation and Exhibition by Indira Cesarine

Indira Cesarine Studio and The Untitled Space are pleased to present “THE LABYRINTH” an installation and exhibition of works by artist Indira Cesarine featuring photography, video, painting, and sculpture, as well as a series of performances inspired by the artwork. The exhibition opened with an artist reception on March 12th, 2020 featuring a special performance by renowned modern dancer Katherine Crockett. Due to the pandemic, the exhibition closed on March 13th, and the updated exhibition dates are June 24 – September 12, 2020 by appointment according to CDC guidelines.

For “THE LABYRINTH” Cesarine has created an immersive installation, transforming the gallery into a maze through which viewers can experience her contemporary female gaze on Surrealism, a theme the artist has been exploring through a variety of mediums over the past several decades. “THE LABYRINTH” is a surreal odyssey that reveals through its passages a kaleidoscopic universe of subconscious realities bound by the contrasts of hyperrealism and ethereal symbolism. Cesarine leads the viewer through this maze of discoveries, presenting works that are deeply personal and equally created in response to the influence of Surrealists including Jean Cocteau, Man Ray, and Dora Maar. “THE LABYRINTH” explores the juxtaposition of contrasting opposites, dimension, distortion, and the power of light to engage and reflect on our own stream of subconscious while provoking the tangibility of perceived realities. The result is a journey through our fantasies and expectations, rendered through the lens of dreams and desires.

The juxtaposition of Cesarine’s macro and kaleidoscopic florals created for “THE LABYRINTH” play in sharp contrast to the visual yin yang of her surreal portraits of women that explore female sensuality and identity. Through the lens of fantasy and illusion, she toys with imagery of the subconscious mind, depicting the human form with power and subjectivity. Hands and faces intertwine in a reverie that is part real, part illusion. Sculptural hands project from the walls of the installation as though coming alive, part human, part sculpture, in a manner that is both seductive and haunting. Video art, including a 2020 remix of her film “The Spell” which was featured at The Metropolitan Museum of Art, adds to the visual poetry and experience of the maze. Her use of symbolism and dramatic chiaroscuro conveys emotionally charged imagery that presents both an escape into fantasy and a journey through our unattainable desires. As one walks through “THE LABYRINTH,” there is a sense of being lost in time as kaleidoscopic images come alive off the walls. Mirrors positioned throughout the installation emphasize our own reflections while exploring the surreal landscape of the artworks on display.

“THE LABYRINTH” exhibition and installation features Cesarine’s most recent body of work, as well as select works from her “Goddess”, “Les Fleurs du Mal”, “Pandora’s Box” and “ONLY YOU” series. Cesarine’s “Goddess” series, featuring dancer Katherine Crockett, presents emotive images of the female form juxtaposed with detailed florals, creating surreal portraits that according to the artist, emphasize the graceful strength of Mother Earth as a goddess and the power of nature. “Les Fleurs du Mal” welded steel sculpture series reflects on the emotional impact and symbolism of flowers. The depiction of flowers, whether as a still life, as part of a photographic composition, or in the form of a 3 dimensional sculpture has been an ongoing theme in Cesarine’s artwork dating back to her early photography series shot on medium format film in the 1990s. Also featured in the “THE LABYRINTH” are a selection of photography and video art from her “ONLY YOU” series, which focuses on the eyes as an emotional portal. Works from her “ONLY YOU” series were previously exhibited at Cannes Film Festival, Art Basel Miami, SCOPE Basel, Switzerland, CICA Museum (South Korea), Red Bull Studios (London), and Norwood Arts Club, NY.

“Empowering feminist themes are often a point of departure for my multi-sensory series. My work questions the place of humanity in context with contemporary civilization and is often influenced by autobiographical content and women’s history at large. I connect with thematic subject matter that engages a narrative of social discourse and art activism. As a multidisciplinary artist, I often work across several mediums such as photography, video, sculpture, painting, and printmaking to convey a rich and diverse narrative. Through my exhibitions and artwork, I challenge the status quo, as well as tackle stereotypes and double standards. I draw from historical narratives in an effort to create empowering artwork that can have an impact on the viewer, be a catalyst for change or provide insight into history which may have been overlooked. As an artist I find it is more effective to communicate my ideas through visual and sensory explorations that can uniquely address the world we live in today.

I have been exploring themes of Surrealism in my work since my very first forays into photography back in the late 80’s. Experimental darkroom techniques such as solarization and double exposures have played an important part of my visual narrative, which also often employs nuances of fractured light. While studying for my degree in Art History at Columbia University in Paris I became very interested in the history of Surrealism, and wrote a 30 page paper, “Surréalisme, Sexualité, et La Femme,” on the male gaze and misogyny of many of the original Surrealists. Presenting an empowering female perspective on images of women has always been an important part of my work. Explorations of female identity, sexuality, dreams and desires have been returning themes in my artwork since I first started creating. In the early 2000s, I expanded from the still frame and works on canvas and paper to moving images, with experimental filmmaking and video art. As my work has evolved, I have become inspired by creating 3 dimensional works in glass and steel that further propel my visual language. My sculptures explore themes of female identity, symbolism and experience, employing a technical emphasis on light and reflection, often combining figurative sculpture with neon or video display to further engage a multifaceted experience.

Katherine Crockett is a celebrated modern dancer and choreographer who performs internationally. She was the principal dancer for Martha Graham Dance Company and toured internationally with the company for 21 years. Crockett starred as The Queen in the Off-Broadway immersive theater hit, “Queen of the Night,” for which she created and choreographed her role. She played Cate Blanchett’s dancer double in “The Curious Case of Benjamin Button” starring Blanchett and Brad Pitt, directed by David Fincher, and starred alongside Mikhail Baryshnikov as Helen in Richard Move’s “Achilles Heels-The Show”. Crockett has additionally performed at the Cannes Film Festival, the VH1/Vogue Fashion Awards, and on the runways of Prada, Alexander McQueen and numerous other global luxury houses. She has collaborated with artist Indira Cesarine on numerous series, and recently performed at Cesarine’s “EDEN” exhibition at the UN Plaza.

ABOUT ART4EQUALITY
Art4Equality is an initiative launched by artist and curator Indira Cesarine supporting equality themed art exhibitions and special projects including films and public art by female identifying artists and allies. The mission of Art4Equality is to create empowering artwork and exhibitions that can impact social change, raise awareness and inspire our community. Art4Equality additionally facilitates opportunities by providing mentorship to artists, as well as special programing such as panel discussions, performances, and educational art events. Art4Equality empowers by creating a platform for progress. By supporting the work of underrepresented and marginalized artists, Art4Equality demonstrates the value, quality, and diversity of their contributions to the community, encourages an inclusive dialogue, and promotes equality for all. Art4Equality is a sponsored initiative of Fractured Atlas, a non-profit 501(c)(3) arts service organization. Tax deductible donations are accepted online.