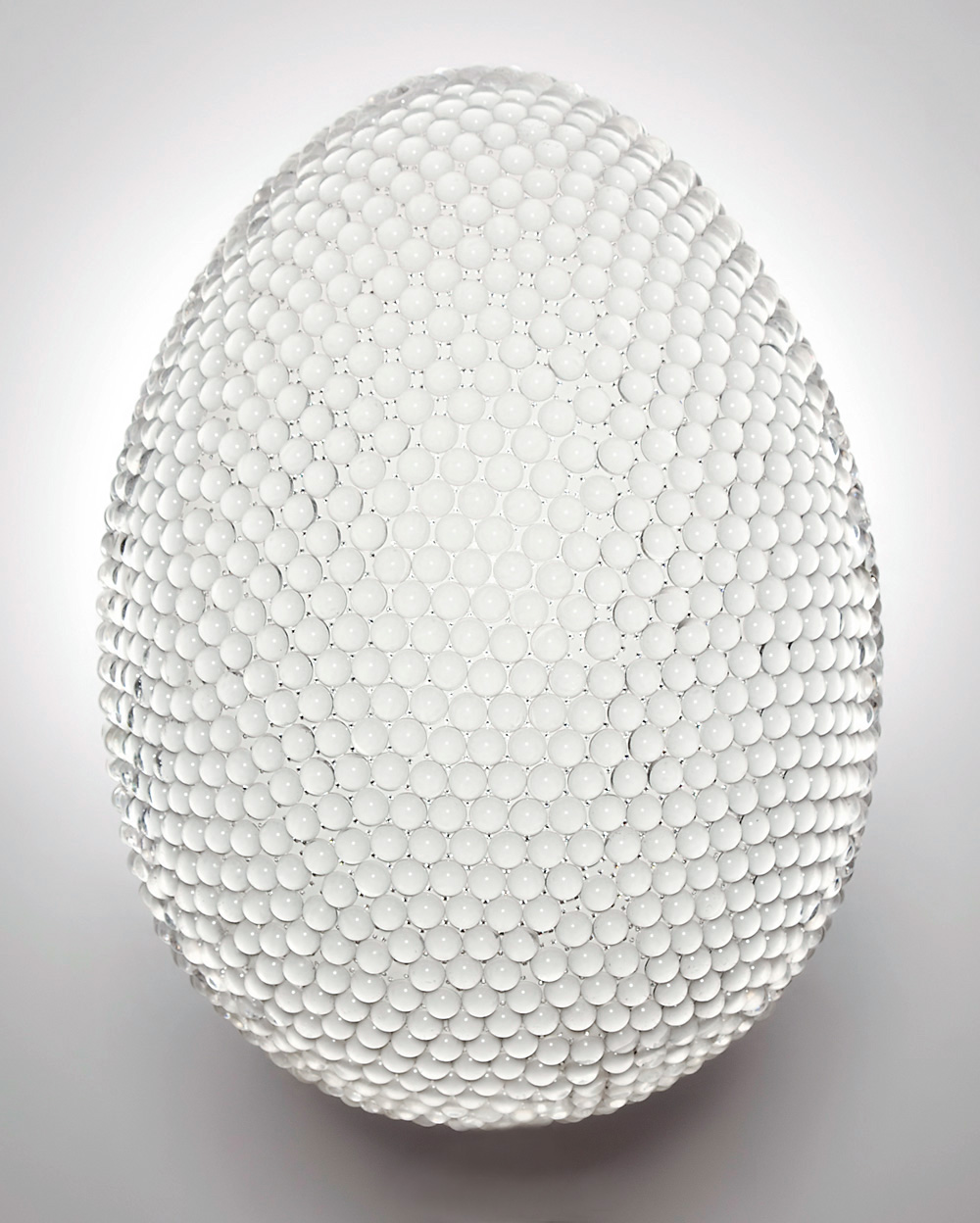 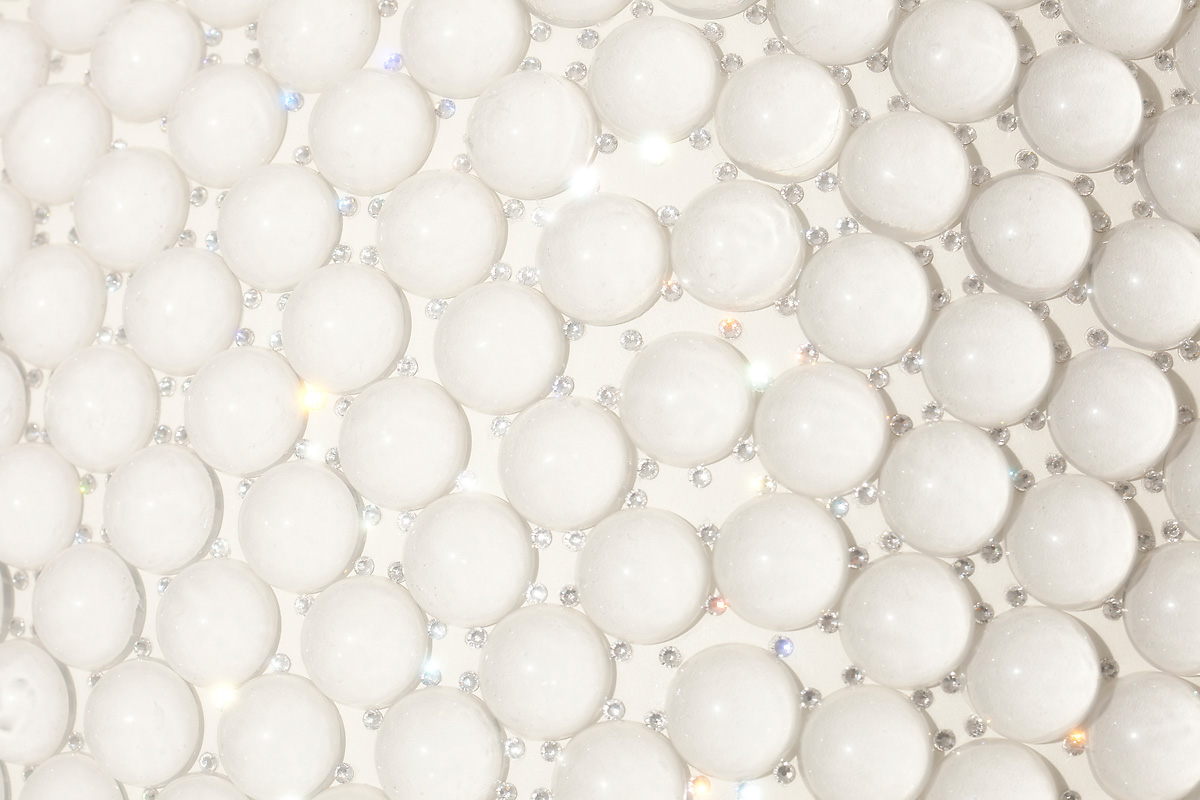 Indira Cesarine, "The Egg of Light" 2014 (detail) Sculpture made of fiberglass, glass and crystal. 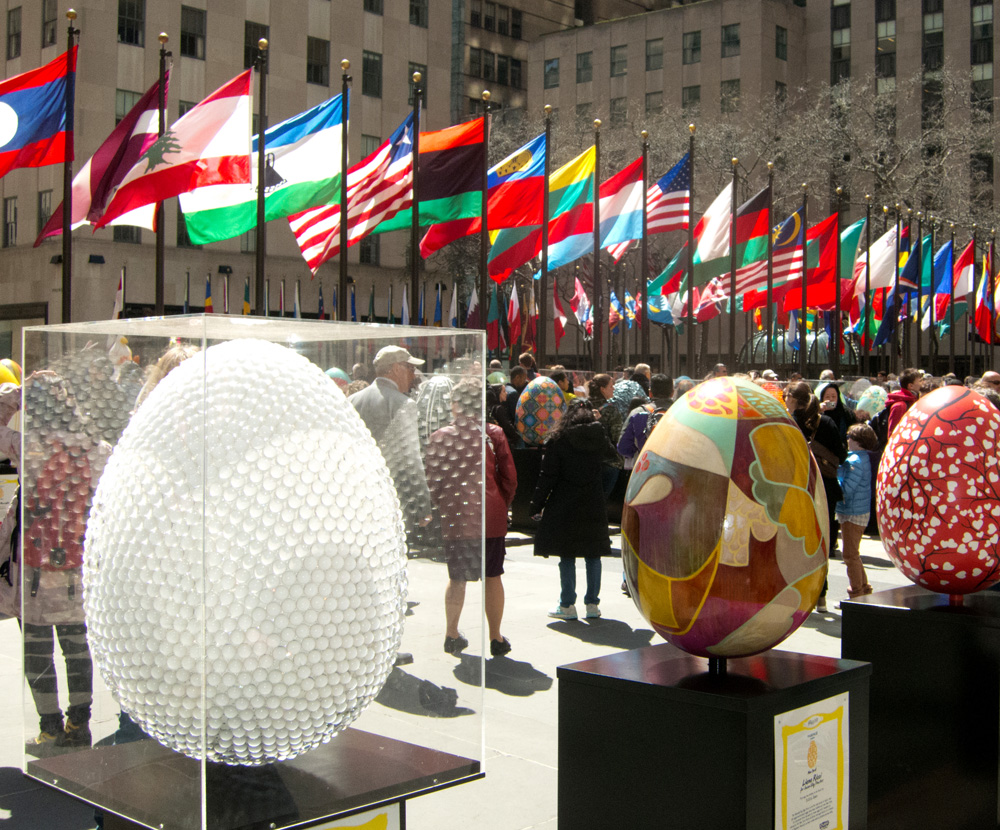 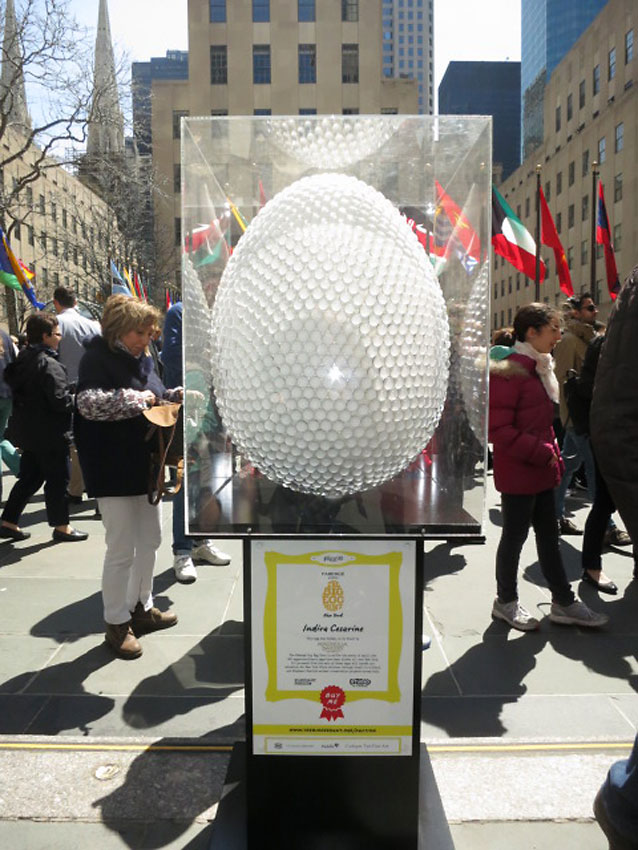 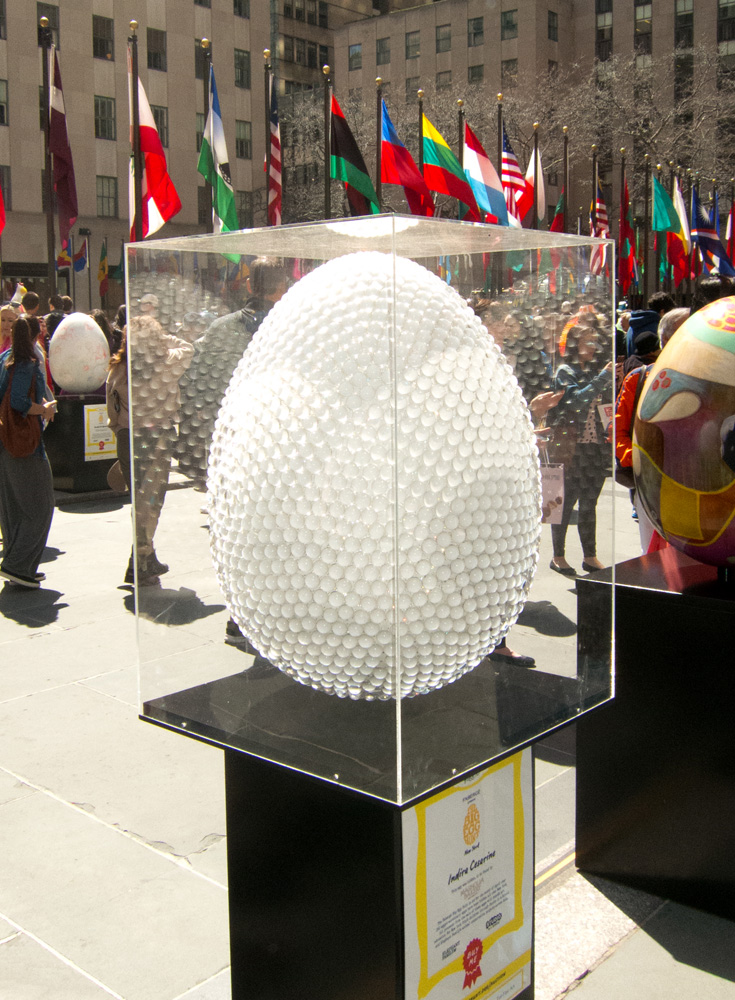 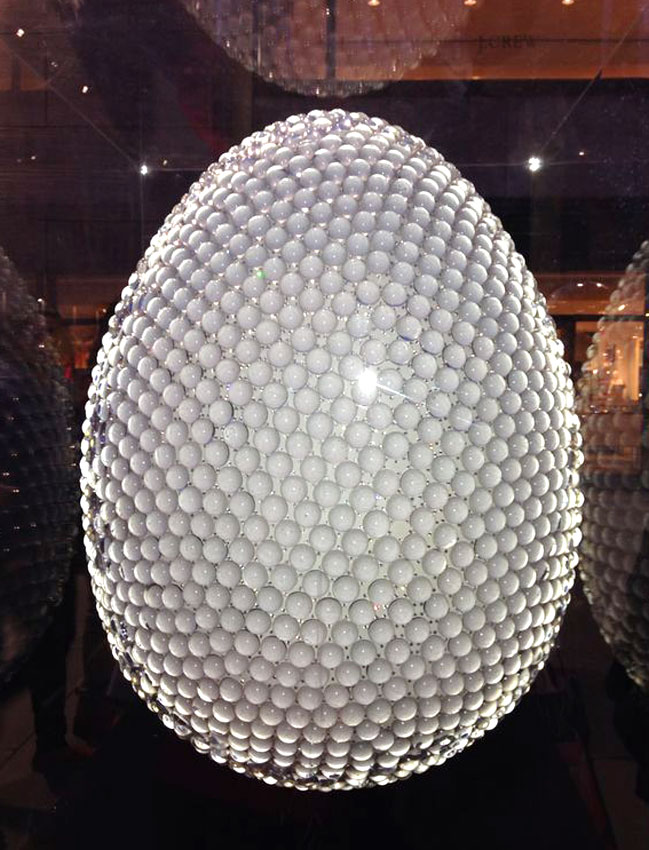 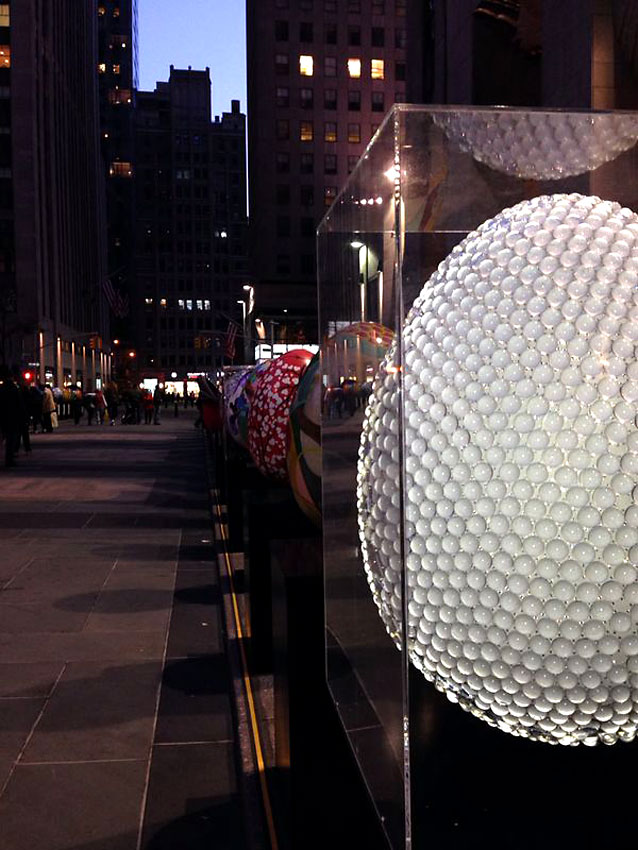 “THE EGG OF LIGHT” SCULPTURE

The Egg of Light by Indira Cesarine was created for the Big Egg Hunt NY sponsored by Fabergé.  The benefit exhibit, which featured original works by over 100 artists including Jeff Koons, as well as many other well known artists and personalities, took place throughout New York City from April 1st – April 26, 2014. The “Egg of Light” sculpture was exhibited at Rockefeller Center, and is covered by over 2000 glass globes, each surrounded by Swarovski crystals, of which over 5000 were individually applied in a perfect mathematical formation to reflect and refract particles of light when the egg is near sunshine or a light source.

Artist Statement on the sculpture: “As an artist I have always been inspired by light particles and the impact of light of objects, as well as the overall universal meaning behind light and the beauty it creates. Light is the universe, and is inherent in our everyday lives, yet is often taken for granted, as we live and breathe it to be alive. This Egg is not only inspired by the breathtaking beauty of light, it is an ode to light as communication, as a form of emotional impact and it’s ever changing multi-faceted nature.

The Egg of Light effectively refracts light from all angles, and as the light of the sun moves throughout the day, so will the egg transform, reflecting and refracting light, giving each viewer of the egg a new experience that is original and spontaneous. It draws one in as the light sparkles around its globular form, breathing light from inside and out.

Upon the fiberglass base, the surface is covered with 1000’s of custom-made glass orbs juxtaposed with crystals that emphasize the reflections and refractions of light. They are placed over the structure to allow the piece to refract light and create the illusion that the egg is glowing from inside out when it is illuminated by the sun. The refractions, (the bending of light as it passes from one medium to another) caused by the glass and crystals mold light into different shapes, refracted into multi-faceted patterns when in a daylight environment or if light is pointed at the sculpture. The piece reflects, refracts and absorbs light – causing a heightened perception of depth and dimensionality. As light is absorbed and refracted it illuminates and ignites the egg in such a way that it appears to be glowing from inside out, enlightened.

This play of light on the egg’s surface effectively mirrors our own world and our own perceptions, creating an illusion above the surface of something simple and pure. Refractions also allow for dispersion, the separation of white light into color, creating ephemeral rainbows adding to the illuminating effect of the egg. Using glass and crystal as an extension of light I am creating a kinetic art form. Light in any daylight setting is constantly changing, thus changing the entire piece. These mediums also interact with movement in the environment around them, thus the exterior imagery of the piece is ever-changing.

The juxtaposition of crystals with the glass on the surface emphasize this reflective nature, as the bending of light as it crosses the boundary into a different medium is determined by its refractive index, or how much the light is slowed down in the new medium. Crystal is a highly transparent glass with a high refractive index. Due to its multifaceted surface, it has a high refractive index giving it the illusion of fire and brilliance as light is refracted, propagated in many different directions, and dispersed across its surface.  Using crystal in addition to glass as a medium for refraction enhances the play of light and illumination of the piece.”

The Fabergé Big Egg Hunt culminated with a spectacular auction of the collectible and one-of-a kind egg sculptures, held by Sotheby’s and online via Paddle8. Created as an innovative and engaging platform to raise funds for the Elephant Family, a charity devoted to protecting and reconnecting Asia’s most important forests for elephants and for all of the animals who share them as well as Studio in a School, a charity dedicated to providing students with a full and meaningful visual arts experience.